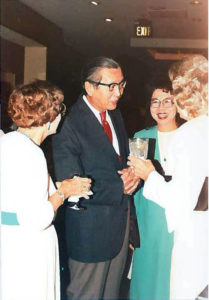 In 1979, Dr. Nai-Kwang Chang became the executive director of the Aurora Education Center (AEC), a satellite campus of the Community College of Denver. It would take five years for the AEC to be officially recognized as the Community College of Aurora (CCA). As Dr. Chang recalled during an interview several years ago, this move to the AEC was an “exile.” He was set up to fail. Arriving one week before classes were to start, Dr. Chang did not find furniture, organized classrooms, or basic supplies for running an educational program. Instead, as he entered the old courthouse building, he found one single telephone sitting on the floor and classrooms that still looked like jail cells. From this almost doomed beginning, through relentless determination, political savviness, and an unyielding belief in what was possible, Dr. Chang guided the transformation of CCA from the AEC to a stand-alone comprehensive two-year college.

After Dr. Chang’s passing on January 15, 2017, it was this commitment to what is possible in Aurora that led Dr. Chang’s three adult children (Ying-Fon, Li-Hon, and Min-Fon) to donate $51,000 to create the permanently endowed NK Chang Founder Merit Scholarship at the CCA Foundation. The scholarship will provide two $1,000 scholarships each year for students that are pursuing programs of study in education or a STEM (science, technology, engineering, or math) field.

When asked why they decided to honor their father’s life by creating this scholarship, Li-Hon Chang said, “Our father’s belief that a solid education was the most powerful tool a person could have led him to spend his entire life promoting education. We felt it every day in his words of guidance to us, just as those he worked with were emboldened by it. He loved to ask questions, and I think his favorite was not “Can this be done?” But, “How can we, together, get this done?” In reflecting on the impact that this scholarship will make in the decades ahead, Dr. Betsy Oudenhoven, CCA’s current President, remarked, “This permanently endowed scholarship will not only continue Dr. Chang’s legacy of transforming lives at CCA, but will forever be a testimony of his unyielding courage to make the impossible possible for students in Aurora.”

To learn more about how you can make college possible for CCA’s students through donating a year-end gift to an existing scholarship or creating a named scholarship of your own, contact John Wolfkill at john.wolfkill@ccaurora.edu or 303-360-4833.